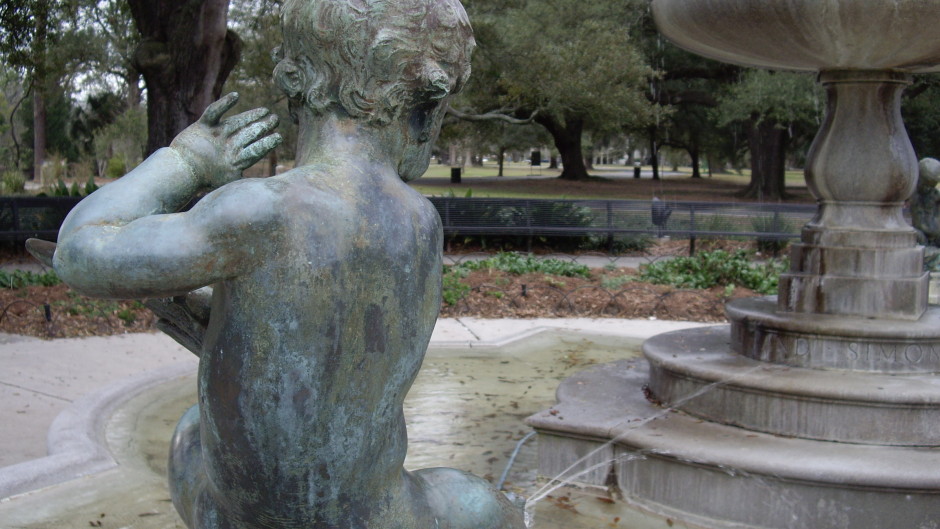 Not “New Or-LEENZ” and certainly not “N’awlins.” No one says that. Ever. We don’t know where that came from, but it’s silly, and if you try it, people will laugh at you and/or look at you funny.

2. We do not use cardinal directions

Directions are thus: Uptown, Downtown, River, Lake. If you ask us if your hotel is “North of here,” we’ll have no idea what you’re talking about.

3. That grassy terrain between the two lanes of a boulevard is called the “neutral ground”

There’s some history behind that. A “median” has something to do with statistics, but we’re not exactly sure.

If you bury something in NOLA, it’s likely to pop back up with the next hard rain, which happens a fair bit here. Since people tend to get upset when their deceased loved ones literally rise from the grave, we inter them in above-ground mausoleums, which make our cemeteries unique and beautiful places that are fascinating to explore.

So flat, in fact, that NOLA has only two hills, both of which are man-made. One was built by the WPA in the 1930s to give local children “the experience of a hill” — if you’d like to climb it, it’s called “Monkey Hill,” and it’s at the Audubon Zoo.

7. Pretty much nothing is pronounced as it’s spelled

8. You’re probably not going to be murdered

Yes, there is crime in New Orleans, and it can be pretty bad, but it’s been getting steadily safer. Just don’t treat it like Disneyland for drunks. Use a little common sense, and you should be just fine.

So long as it’s in a plastic container called a “go cup.” Go get one!

10. Not everyone speaks French

11. It gets ABYSMALLY humid here, particularly in the late summer

This being the tropics — you can tell by the banana trees and flying cockroaches the size of Volkswagens — July and August in NOLA are pretty much insufferable.

12. We’re secretly afraid of driving into a canal or a bayou

Because it happens. It’s freaking terrifying. And not just because of the giant, amphibious, orange-toothed rodents that call our part of the country home.

There’s a lot of history on Bourbon, and it’s maybe worth checking out once, if you’ve never seen it, then moving on to other, way better parts of the French Quarter.

Not unless you’re Joe Francis.

16. Strangers will speak to you

Do not be alarmed or recoil in horror — they’re not obsessed with you, that’s just part of life down here. You’ll probably learn a lot about their sex life, literature preferences, prosthetic limbs, prison terms, and so on, and you’ll part as friends.

Hence the lack of a question mark. If somebody shouts WHO DAT! in your direction, there are only two acceptable responses: “WHO DAT!” and “Yeah you rite!!!” The NFL tried to claim a trademark on “WHO DAT!” not long ago. New Orleans was not pleased. The NFL didn’t win.

18. The people who live here are, you know… people

We have normal lives, jobs, children, mortgages, professional ambitions, etc. Our home just happens to be slightly (or drastically) more fun and bizarre than yours.

19. We genuinely love to dance

Grannies dance. Kids dance. Dentists and plumbers and tax attorneys dance. When you go to see a show in NOLA, feel free to move and not just stand there like a terrified corpse.

20. There is a New Orleans accent… it’s just not what you think it is

Not all New Orleanians have a thick accent, and some natives might not have much of one at all. But the real New Orleans accent has been so mangled and misrepresented in various media (we’re looking your way, Kevin Costner in J.F.K.), people are often unprepared for the weird, wonderful, Brooklyn-by-the-way-of-the-Mississippi-Delta way many of us actually speak. This is called the “yat” accent, as in “Where y’at?”, which is a common greeting here.

21. New Orleans is NOT the South

NOLA may be located geographically in the southern part of the United States… but It’s essentially a banana republic within the rest of Louisiana. Or, as one local chef once put it, “a Northern annexation of Haiti.”

Depending on where you are (or “where y’at,” rather) and what time of year it is, New Orleans might smell like horse manure, cigarettes, urine, dead fish, marijuana, vomit, diesel fumes, fried chicken, Confederate jasmine, old wood, coffee, Angel’s Trumpet flowers, mown grass, mossy trees, and sweet olive.

What to do for freezing weather. »